Release mechanisms are used on larger aircraft that can't be released by hand. EDFs and other fast aircraft are easier to launch with a ramp, or launch block and a simple release mechanism.

We have a 3 ring release which is the type of release used on parachutes. This mechanism can hold a large force with very little effort.

Small parachutes are used on the Highstart line to bring the line back downwind. We also have arresting chutes for the higher powered bungees.

These are safety accessories to slow the bungee down in the event of failure or a stake pulling out. We have a pedal release, but it won't be available until the end of summer.

Check out the links below for DIY diagrams of pedals, launch blocks etc.

For prototyping and custom inquiries 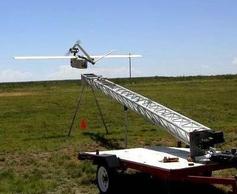